The Listening section of the test measures the ability to understand conversations and talks in English.  Answer all the questions on the basis of what is stated or implied by the speakers you hear. Do not take notes.

In this part you will see short conversations between two people.  Choose the best answer to each question.  Answer the questions on the basis of what is stated or implied by the speakers.

1.
Woman: Pardon me.  Do you know what time that this store opens?
Man:  I do not, but I believe that it is written on the door.

2.
Woman:  I am going to buy Johnny a toy train for his birthday.
Man:  Are you sure he’d like one?

3.
Man:  I need some shampoo for my hair.
Woman:  All of the shampoo is in the back of the store on the third shelf.

4.
Man: Are you going to go to the University of Texas to get your Doctorate?Woman:  I don’t think so.
Man:  Why, have you been accepted to any other schools?
Woman:  Yes, I have received news of acceptance from LSU, University of Tennessee, and Harvard.

Narrator:  What are the speakers discussing?
a.      The University of Texas
b.      Schools with Doctorate programs
c.       Where the woman will go to school
d.      Who can get accepted to the most schools

5.
Man:  I’m really tired on studying for economics every weekend.
Woman:  I hear you.

Narrator:  What does the woman mean?
a.      She has excellent hearing
b.      She has heard the man talk about this frequently
c.       She understands his point of view
d.      She needs to have her ears checked

6.
Man: We are going to get ice cream.  Would you like to come with us?Woman:  I am waiting for a package to be delivered.

9.
Man:  Did you get you movie passes?
Woman:  I spoke to your secretary about it, and she took care of it for me.

11.
Woman:  Marie sure likes shopping.
Man:  If only she liked doing homework as well!

13.
Man:  Did you know that Tracey and Bob are back from their honeymoon to Las Vegas?
Woman:  So they did get married after all.

16.
Man:  How did the job interview go?
Woman:  I could not have been more pleased.

In this part you will see several longer conversations and talks.  You should answer each question on the basis of what is stated or implied by the speakers in the conversation or talks.

Narrator:  Listen to a lecture by a biology instructor.

Many people think of gorillas as dangerous killers.  One reason for this is that television and movies often show these animals this way.  But gorillas are really gentle animals.

The gorilla is a vegetarian.  It lives in the African rain forests where it finds the fruits and plants it needs to survive.  A large, wild gorilla might eat over 40 pounds of leaves and fruit in one day.

Unfortunately, these peaceful creatures are in danger of becoming extinct.  Each year, large areas of the rain forests are being cut down.  Because there is less and less food from these forests, the number of wild gorillas is becoming smaller and smaller.

Narrator:  Listen to the conversation between two graduate students.

Woman:  What did you think about the assignment we were supposed to complete for our statistics class?
Man:  I haven't done mine yet.  Is it difficult?
Woman:  Kind of.  It was full of problems.
Man:  Derivative problems?
Woman:  Not really, More a review of the whole semester.
Man:  Oh.
Woman:  It was time consuming.
Man: Really?
Woman.  Yes.  I started it at about lunch time and didn’t finish it until supper. Man:  I’m surprised at that.
Woman:  I was too, I did not expect our professor would give us so much.
Man:  He usually doesn’t.
Woman:  I know.  That is why I was surprised.
Man:  Well, I do have some free time this afternoon.  Do you know when it is due? Woman:  Tomorrow.
Man:  Well, I better get moving.

Narrator:  Listen to part of a conversation between a student and a clerk in a college bookstore.

Man:  I need to buy an basic English textbook.
Woman:  Okay.  What is the course number?
Man:  You mean there is more than one
Woman:  Sure.  We offer Poetry, Writing, and Literature.
Man:  If I take Poetry will we write sonnets?
Woman:  Not really.  The Poetry class is very basic rhyming.
Man:  Great.  That is what I wanted to hear.  How much is that one?
Woman:  It’s twenty-nine dollars, plus a ten-dollar notebook fee.
Man:  Wait a minute, can’t I just use my own notebook.
Woman:  Most students prefer the special poetry notebook, so we made it a requirement.
Man:  Okay.  I’ll take one Poetry book and notebook.  Do you take credit cards? Woman:  Yes, but you don’t have to pay now.  Just fill out this form and we will bill you.
Man:  Sounds great.

Narrator:  Listen to part of a lecture in a wetlands ecology class.  The professor is talking about sanderlings.
Urbanization and coastal development has dramatically reduced the beach habitat available for foraging shorebirds worldwide. This study tested the general hypothesis that recreational use of shorebird foraging areas adversely affects the foraging behavior of sanderlings Calidris alba.

Observations conducted on two central California beaches from January through May and September through December of 1999 showed that number and activity of people significantly reduced the amount of time sanderlings spent foraging.

Although the sample size was low, the most significant negative factor was the presence of free running dogs on the beach. The experimentally determined minimal approach distance did not vary significantly with the type of human activities tested.

Based on these results, policy recommendations for minimizing the impact of human beach activities on foraging shorebirds include: (1) people maintain a minimum distance of 30 m from areas where shorebirds concentrate and (2) strict enforcement of leash laws. 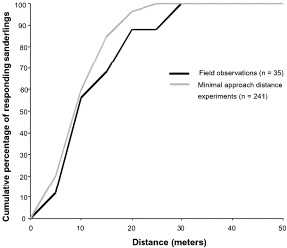 A total of 492 focal birds were observed, of which a sanderling was disturbed by passing humans on an average of one every 15 min with 96% of those sanderlings responding to humans at a distance of 30 m or less (Fig. 1).

Sanderlings responded to human activity by either running (42%) or flying (58%). Within the 1-min sampling time, the disturbed sanderling generally moved once (58%), with 42% moving more than once due to human disturbance.

32.
What are some environmentally sound results to come from this study?
a. Enforcement of leash laws would be effective.
b. Observe Calidris Alba daily.
c. People should maintain a minimum distance of 30 meters from shorebirds.
d. Coastal development has dramatically reduced the beach.

33.
This experiment determined that the most significant negative factor to reduce the amount of time that sanderlings spent foraging was:
a.      Humans passing once every 15 minutes.
b.      Humans disturbing the sand
c.       Sanderlings running or flying
d.      Free running dogs

Narrator:  Listen to a conversation between a student and a graduate assistant in the marketing department.

Man:  May I help you?
Woman:  Hello, My name is Rebecca Smith and I have an appointment Monday at ten o’clock with Dr. Cudd.
Man:  Yes, ten on Monday.  I see it here on his planner.
Woman:  Well, I was wondering if it would be possible to move my appointment until later in the afternoon on Monday.
Man:  I’m sorry, but Dr. Cudd is tied up in meetings all afternoon.
Woman: Oh.
Man:  There is an appointment earlier that morning, if that would help you.  Or you could see him Tuesday afternoon at two.
Woman:  No thanks.  I’ll just rearrange my schedule.

Narrator:  Listen to part of a lecture in a macroeconomics class. The professor will be taking about the indicators business cycle.

The financial media generally considers two consecutive quarters of negative GDP growth to indicate a recession. Used as such, the GDP is a quick and simple indicator of economic contractions.

However, the National Bureau of Economic Research (NBER) weighs GDP relatively low as a primary business cycle indicator because GDP is subject to frequent revision and it is reported only on a quarterly basis (the business cycle is tracked on a monthly basis).

The NBER relies primarily on indicators such as the following:


Additionally, indicators such as manufacturing and trade sales are used as measures of economic activity.

39.
Which of the following is used as a quick and simple indicator of economic contractions?
a.      Gross Domestic Product
b.      Employment
c.       Personal Income
d.      Industrial Production

Narrator:  Listen to part of a conversation between a student and her professor.
Emily:  Thank you for letting me speak with you today, Dr. Miller.  I would like to talk with you about my semester average.
Dr. Miller:  I see.
Emily:  Well to be honest with you, I was upset when I saw my grade.  I thought that it would have been better.
Dr. Miller:  Why is that?
Emily:  I got an A on my midterm project.
Dr. Miller:  I remember how good yours was.
Emily:  I received an A on my final exam, but I still received a B in your class.
Dr. Miller:  Your grades were very good according to my grade book.
Emily:  Can you explain why I received a B instead of an A?
Dr. Miller:  Twenty percent of you grade was based on your participation in the class discussions.  Even though you always did well on you assignments, you never added your opinions or volunteered in class.
Emily:  But I tried, I am just shy.
Dr. Miller:  I am sorry Emily the syllabus states that everyone must participate in order to receive there full grade for the class.
42.
What event prompted this discussion?
a.      Emily’s semester average
b.      Emily’s midterm project
c.       Emily’s final exam
d.      Emily’s participation